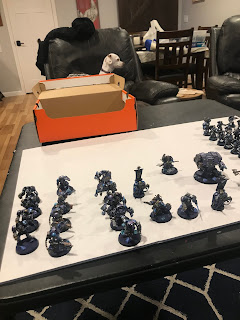 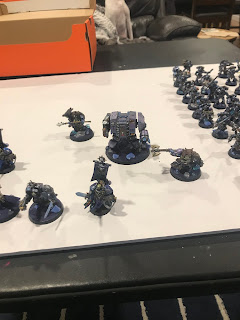 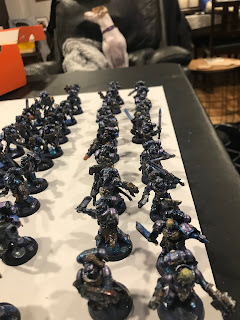 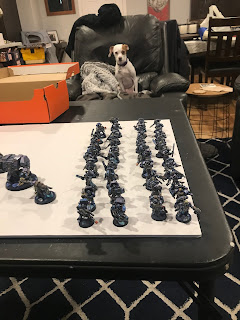 Posted by Darth Weasel at 11:14 AM No comments: 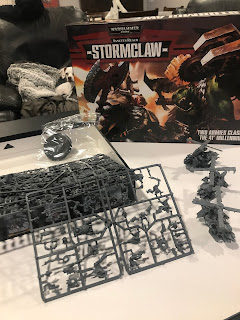 Posted by Darth Weasel at 11:07 AM No comments: 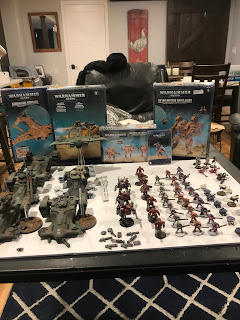 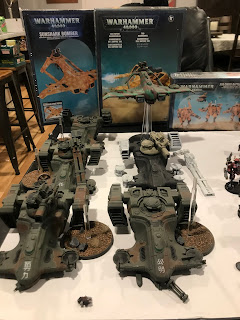 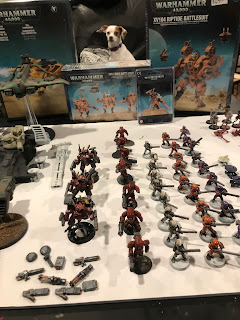 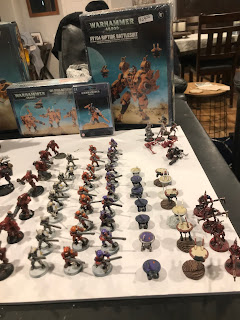 Posted by Darth Weasel at 11:05 AM No comments: 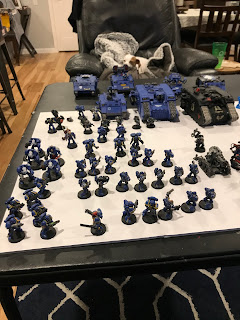 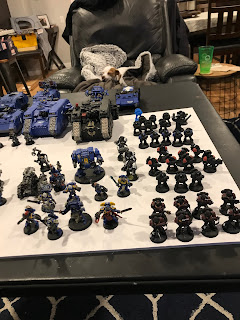 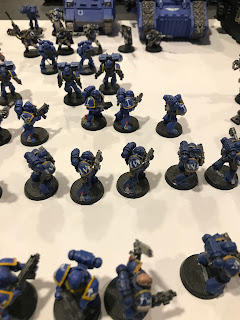 Posted by Darth Weasel at 10:56 AM No comments: 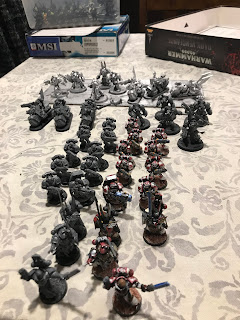 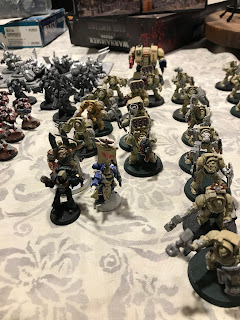 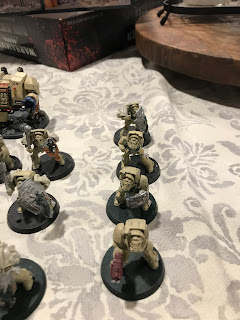 Posted by Darth Weasel at 10:28 AM No comments: 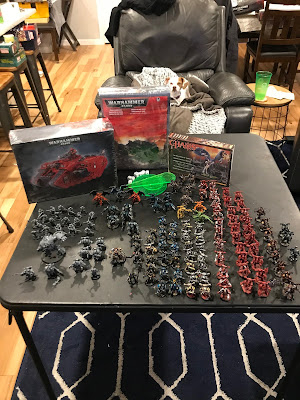 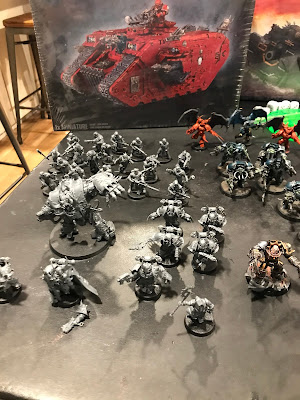 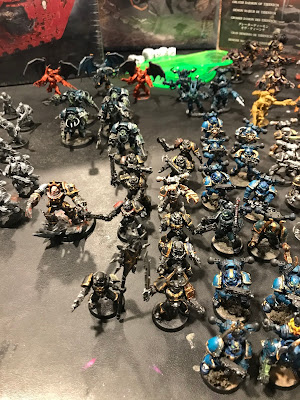 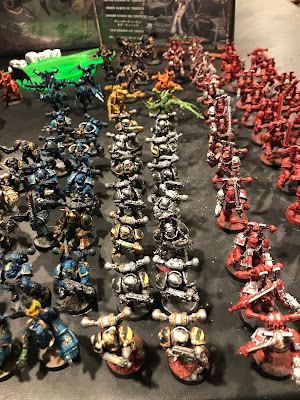 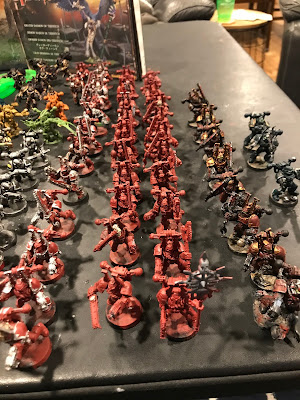 Space Monkey was on vacation so we decided to sneak in a small game last Wednesday. He came over with his DoC and, having played WoC, Goblins, and Dwarfs recently, I decided to try out the Bretonnians. At 750 there is not much to do.

Men At Arms being slow, bad WS and low S are a bad choice against DoC. I would be hitting on 5, needing at least a 4 to wound...they are out. I love knights. lets mount everything.

I put in a Paladin on a Pegasus with the Ogre Blade (S6 would give me a chance if he brought the D-Prince in addition to the accursed Skillcannon of doooooom), my required BSB on regular warhorse,  pulled 6 Knigthts Errant, 9 Knights of the realm, both with full command, and 4 Grail knights. I did not have a model to use for the Skill-a-pult, which is about the only powerful thing in the Bret book but with an army of 2+ save, I should be okay,. 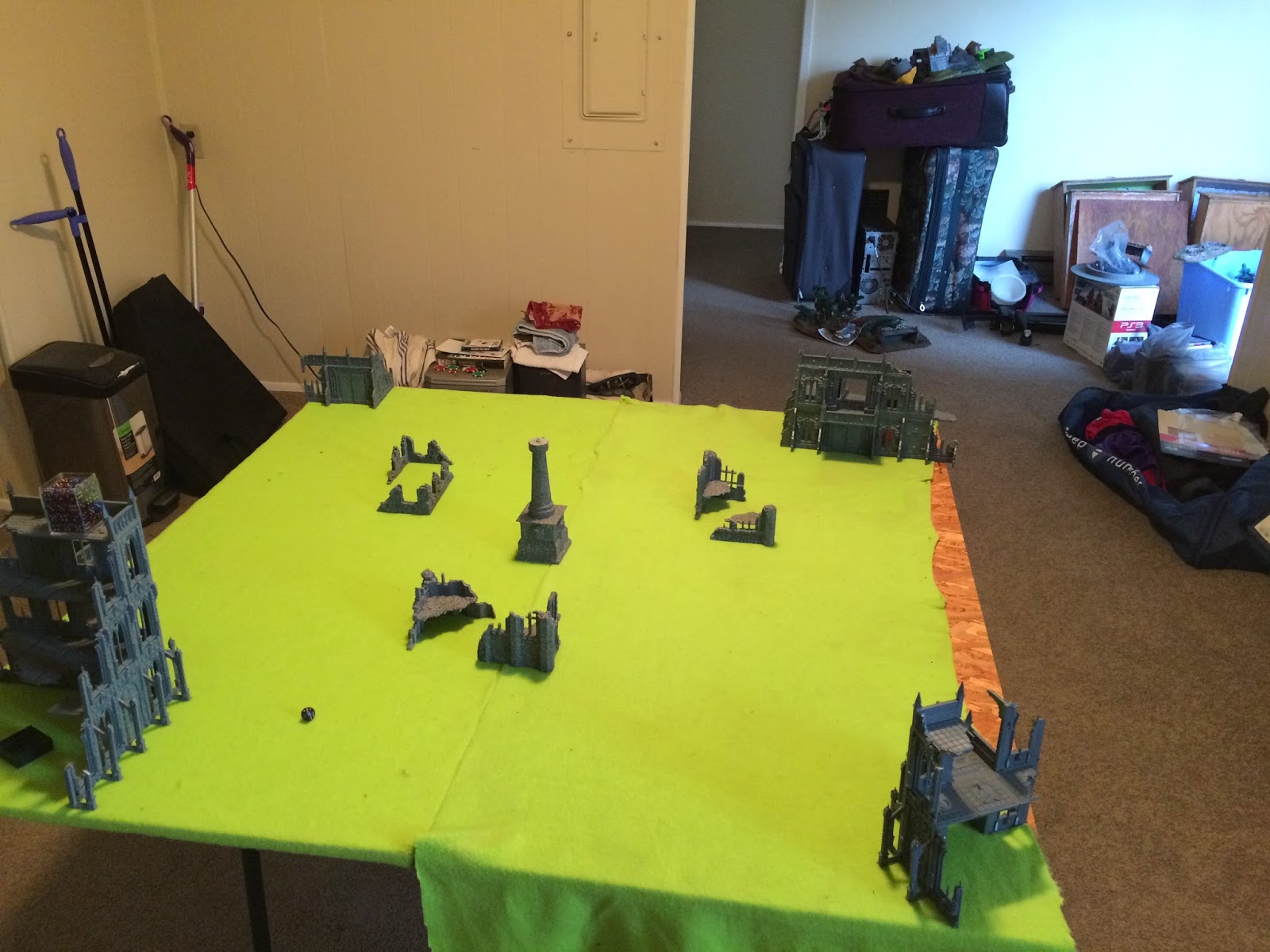 We seldom play scenarios, which is a mistake I think. Battle Line is okay, but it is all we do...I forgot about rolling scenario and elected to get the blessing for the ward. 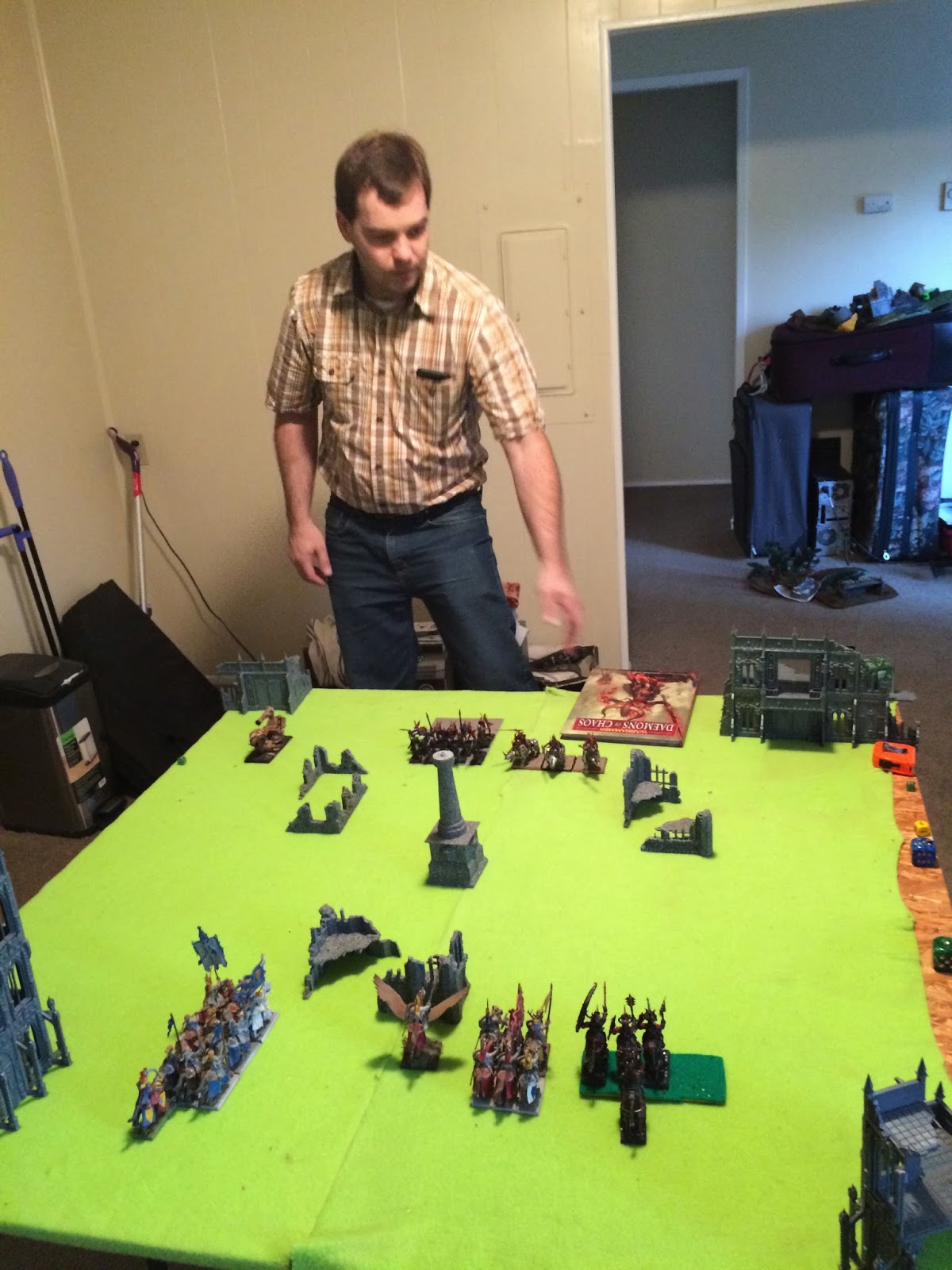 I set up pretty basically. I wanted my 4 Grai Knights as far from the Skillcannon as possible so they were always going to be my last placement. Worked perfectly, with his cannon on my left, my Grail Knights on the right. My Grail Knights and Knights Errant faced his Skullcrushers, the Knights of the Realm his 'Nettes and Cannon.


DOC Turn 1
He made a limited advance witht he Nettes and Cannon, leaving the Crushers on their back line. My nnot putting in peasants or men at arms looks even better. If he was a full on aggressive player, they MIGHT make sense as a hopefully stubborn tar pit, but I know he is an extremely conservative player, so they would be wasted points for me.

I am able to stop his Miasma. 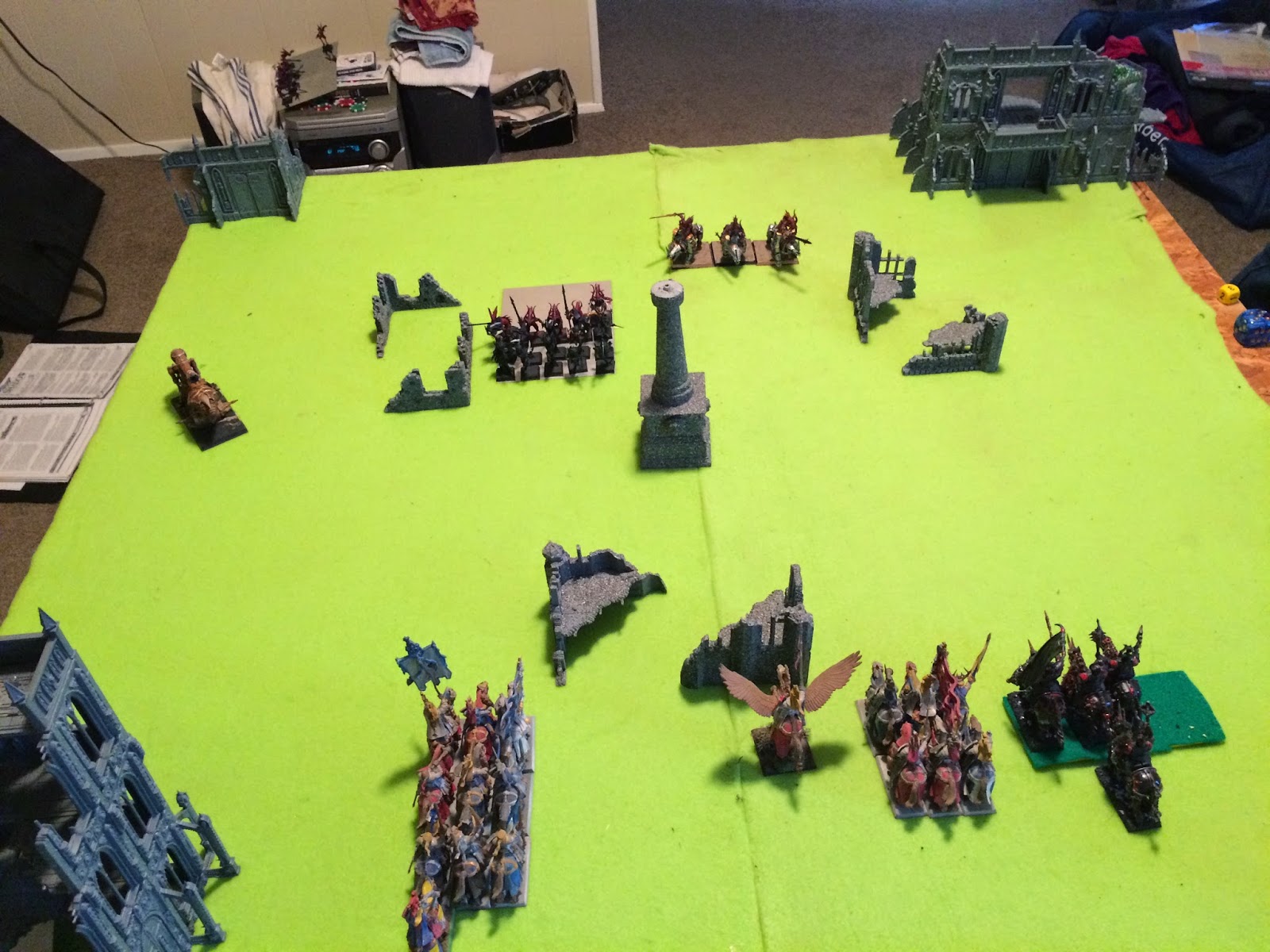 Bretonnian Turn 1
It is a long-shot, but I declare the charge with the Knights of the Realm. S5 would be nice and worst case I probably get in the way of the cannon. I put the Errants where he will need a 10 with his crushers, and the Grail Knights set up to flank him, as does the Peg Knight. 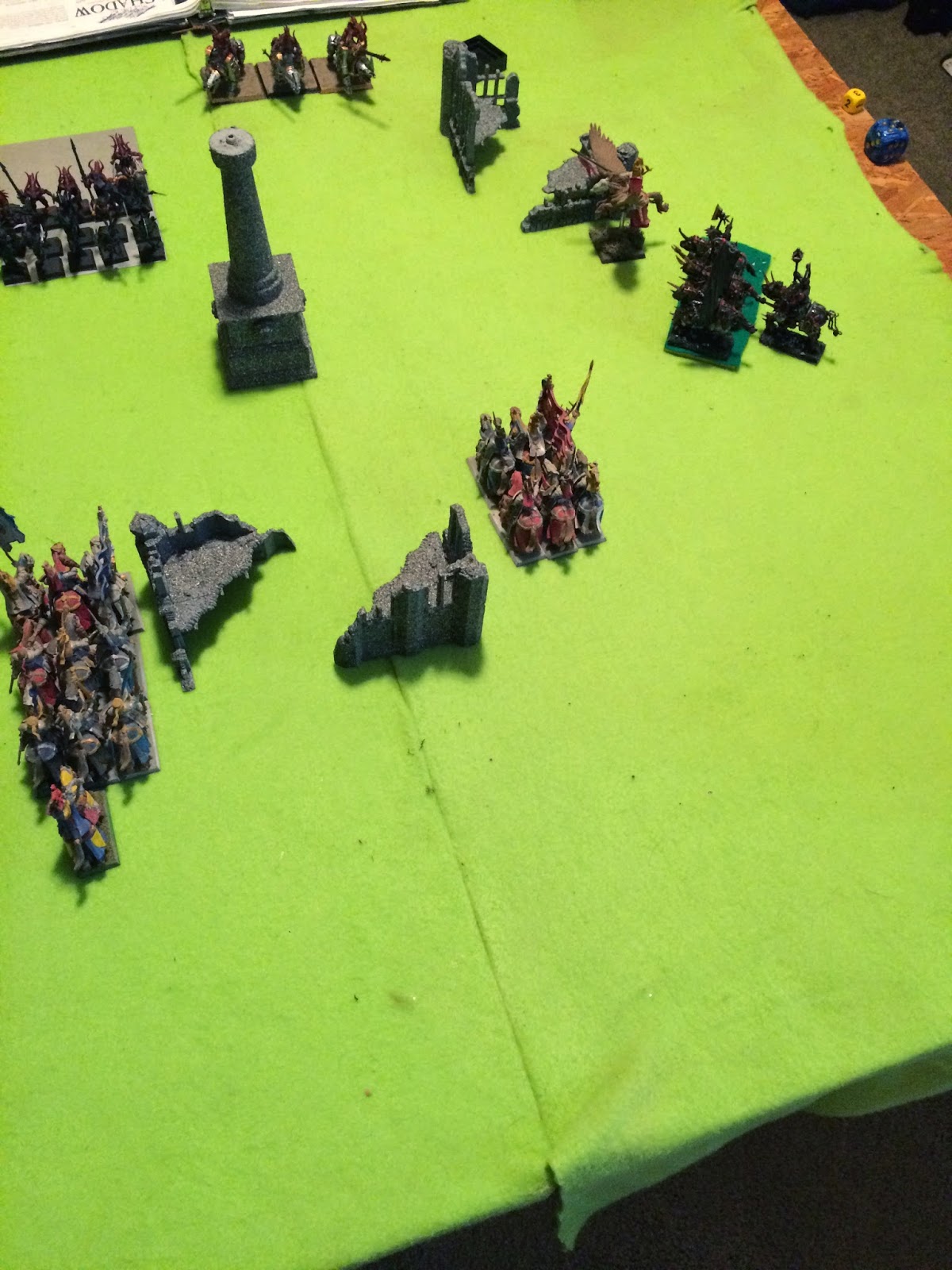 His 'Nettes charge the Knights of the Realm. His Crushers remain immobile while his cannon moves slightly to get a line of sight on the Peg Knight. Stupid move and shoot cannons. Grr. Fortunately his cannon ball stops bouncing about an inch in front, doing no damage. He gets Miasma through this turn, reducing my weapon skill. It does cost me a couple hits, too.

Meanwhile, he has to take LD tests on 3d6 for each unengaged unit. Makes 3 of 5 saves with the crushers and 1 of 3 with the cannon. Yay, I have done 3 wounds to him! Okay, he did them, but...whatever, shortly you will see why I take credit for it.

In the challenge I kill his champion. He gets 3 knights, I get 2 of his guys. We precisely tie.

We have now concluded the successful portion of the battle.... 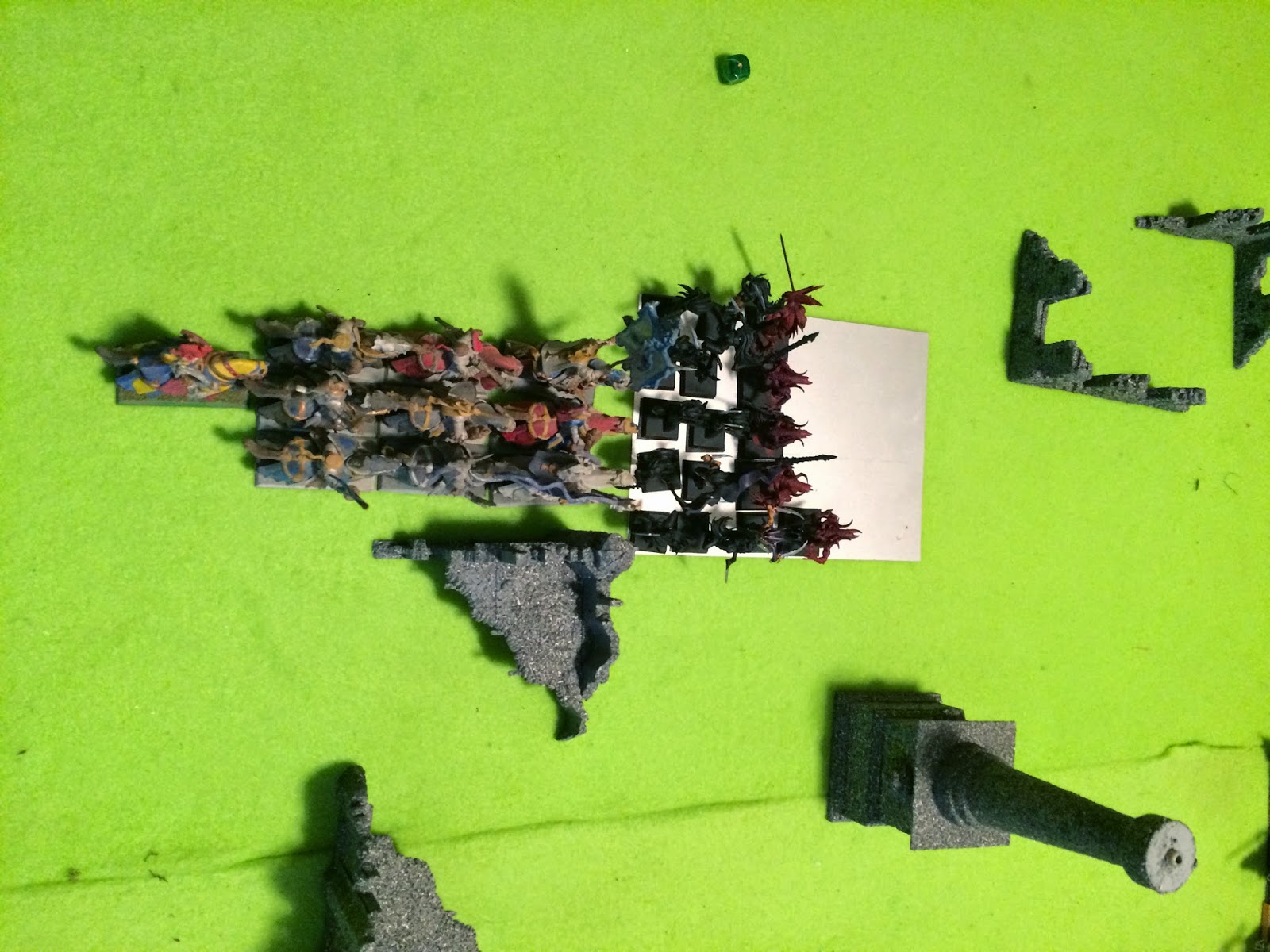 Bretonnian Turn 2
He fell into my clever trap. My Grail Knights and Peg knight announce charges...against the flank of his 'Nettes. The Grail Knights smash into him. Here come 9 S6 attacks plus 3 attacks as my elite knights wipe his core off the table and I should be able to keep rolling and smash into his cannon, neutralizing it. 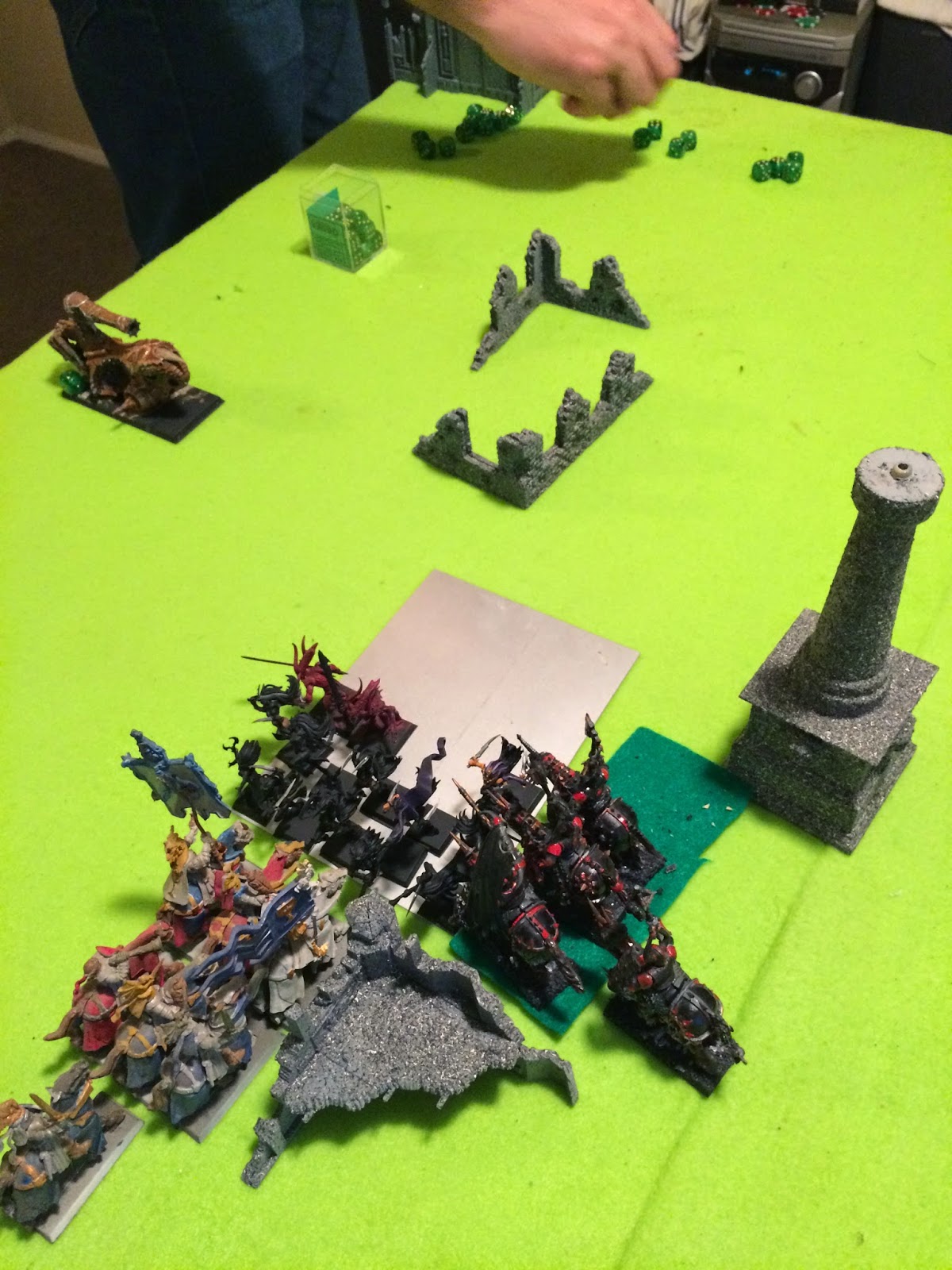 In the challenge his herald kills my Knight of the Realm champ but gets no overkill. He does, however, have his first missed attack of the game for any model in close combat. With his ASF he then kills 5 Knights errant. Not good. With his AP, I think I was saving on 4+. Or, more accurately, NOT saving.

My Grail Knight also fails his save.

No worries, watch my Grail Knights chew through him.

By which I mean fluff EVERY attack. No hits. between my elite Grail Knights and their horses, I combine to create a gentle breeze to cool him off, gently wafting air towards them with the palm fronds I packed instead of swords.

The Knights Errant did nothing but this time I remember I have the BSB Paladin in the unit, and he at least killed 2...but the game is over at this point. With my flank and charge it is close enough that I manage to stay in combat. uh..yay? 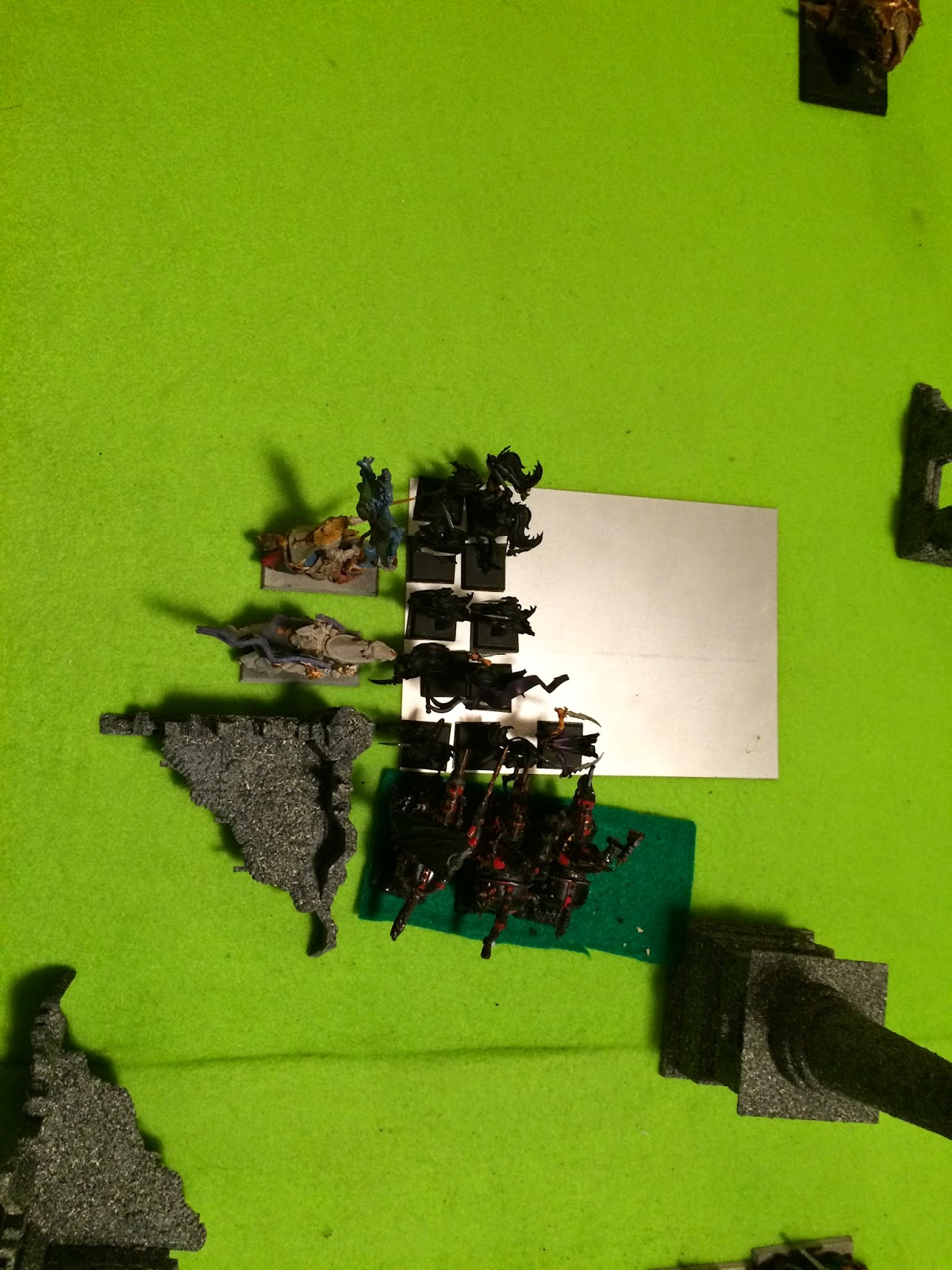 DOC Turn 3
His Crushers charge my Knights Errant. That will be no contest, he will wreck me even with poor rolls.The Cannonb charges the other flank.  The impact kills my last Knight of the Realm and gives the Cannon back a wound, I again do no damage, he kills my Paladin with his Herald, they run down the Grail Knights who did a combined zero wounds in two rounds of combat... 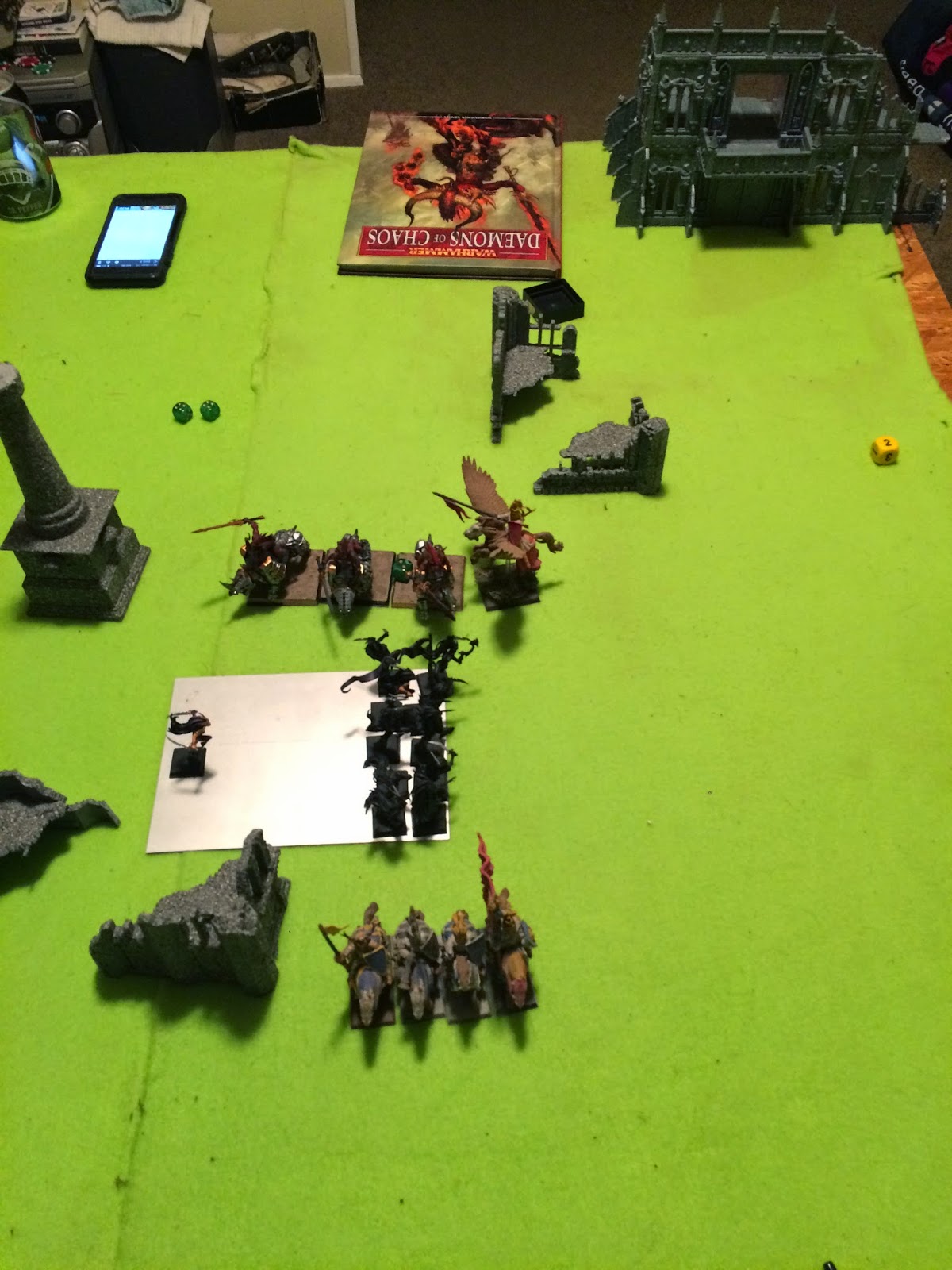 The Crushers handily defeat the Errants, who escape, I flank him with the Paladin forgetting they don't run...instability means that charge will NEVER work even if I do damage...next turn the errants re-engage and by bottom of 4 or perhaps top of 5 at most I am tabled. I think it was bottom of 4, but really...as soon as the Grail Knights fluffed I was done.

in a humorous moment, in the top of 4 he rolled Double 6 on the table and brought on 10 Bloodletters. Nice. 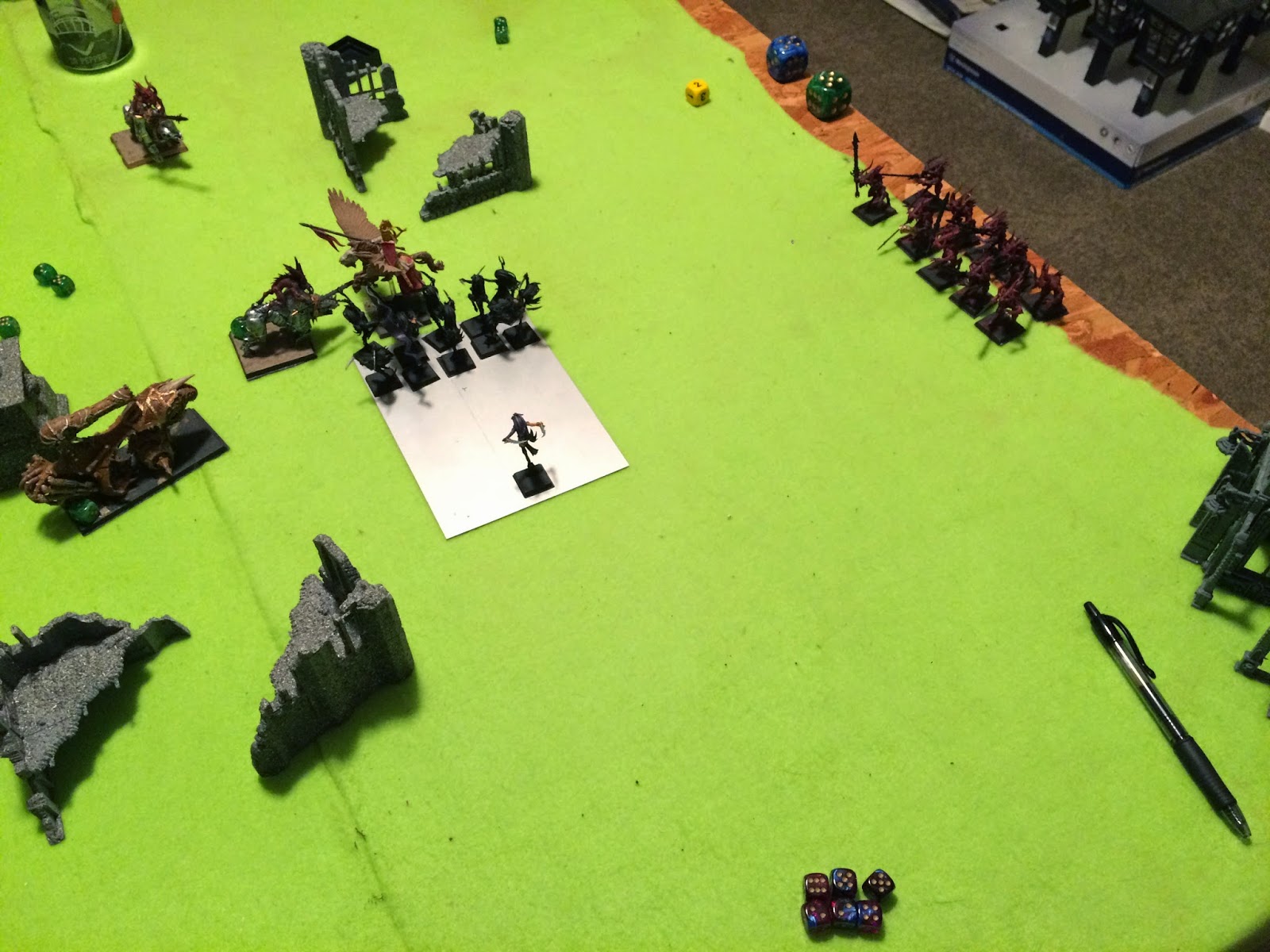 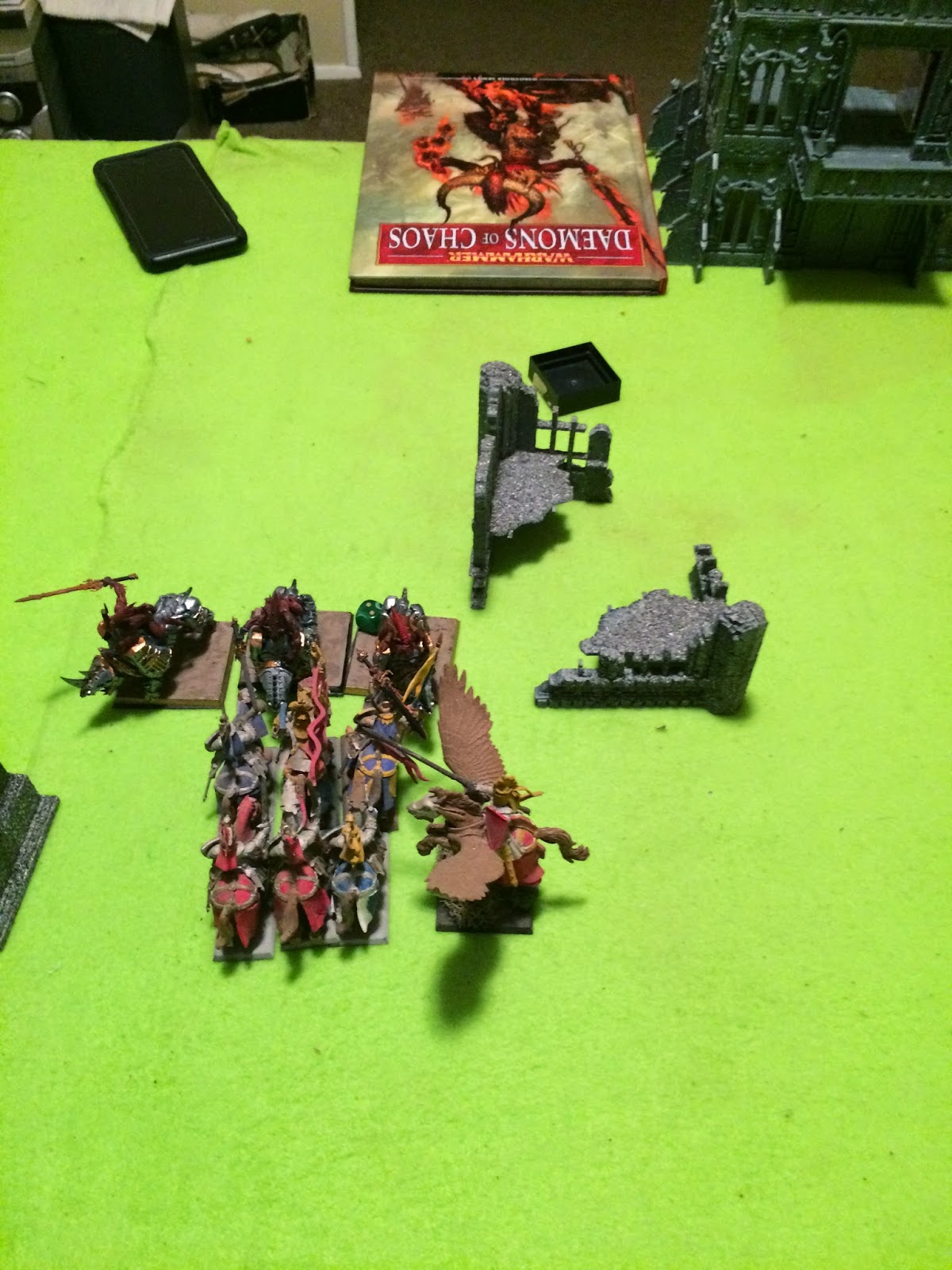 His cannon did zero shooting casualties. His magic only got through once and did 3 wounds to him. I made a couple ward saves.I got off the flank charge I had set him up for, luring him into thinking I was waiting on his crushers. And had the crushers been in range, I probably would have combo-charged them with the Knights Errant in the front and Grail Knights in the flank, but my preference all along was to hit his 'Nettes. It worked like a charm.. Be careful what you wish for, eh?

What went wrong
Grail Knights doing zero hits...never mind wounds, zero HITS. He missed I believe it was 3 close combat attacks the entire game. He dominated this one beginning to end. I knew the Brets were not exceptional, but I really thought it would be a close game he won in the bottom of 6, and not by much. Instead it was an 840-0 slaughter. Oh, and he finished with one fewer model on the table than he started with...


Good time, good lesson. To be competitive, do NOT play Brets until updated.