A suggestion for the campaign

As our armies get larger, the point of the "neutral" armies becomes less and less. So two idea, please let me know which you prefer.

1) any time an army has a 3-1 points advantage, we just assume they win via massacre and move on.

2) We up the size of the neutral armies.

I lean somewhat towards the first both to save time and since there has been less of people playing armies they do not normally play than I hoped for...but i am up for the latter, too, as I am really enjoying the alternative scenarios.

Feedback much appreciated.
Posted by Darth Weasel at 12:53 AM 4 comments: Links to this post

How to play a Meeting Engagement in the Small Campaign

I noted there were a couple of different interpretations of how the special scenario "Meeting Engagement" should be run. Since part of my concept for the campaign is to have some games played that meet the criteria for "not two equal points armies lining up and bashing straight ahead", I am going to show the way I want Meeting Engagement to take place.

I think you will find it makes a real difference in strategy and the way play proceeds and, hopefully, proves enjoyable. I would really like feedback on the presentation; if you find this helpful, I might do the same for Flank Attack, Treasure Hunt, or any other that might have visual aids helpful. Please note; photos are NOT to scale. However, if you click on them an enlarged version should appear.

First, a refresher on the rules:

) Meeting Engagement
Length:Varies. Once last unit has entered battlefield, 6 turns.
Prior to the game, each player lists the units in their army in marching order, units at the top being in front of the column and units at the bottom of the list being the back of the column. War machines, chariots, steam tanks, etc. cannot be first on the list. All characters are listed as one entry. Scouts must be placed first.


Units enter the field in from the edge of their deployment zone in the order listed on the card. They can make a march move on the first turn. The deployment zone extends 12" in to table.
Once the last unit enters the field, the game lasts 6 turns from that point. 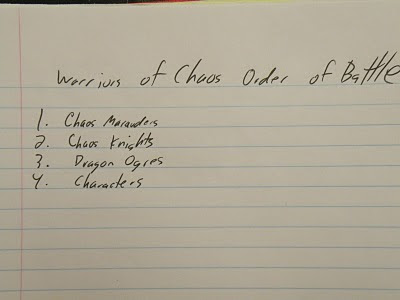 On this list there are no Scouts and no War Machines, so I could have placed them in any order. 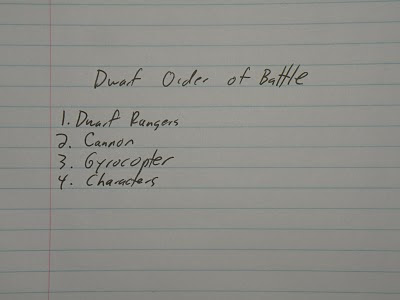 Note that Rangers DO have the Scout special rule, so they MUST be placed first on the list. The Cannon can be 2nd, 3rd, or 4th, and the other items can be in any order. 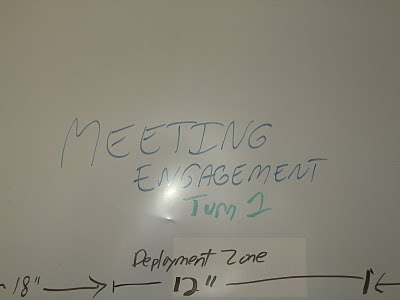 Ironically, this illustration already has an error on it. Ignore the "18"" portion. The 12" in the center represents a 12" clear path. Unlike typical set-up, in a Meeting Engagement Terrain CAN be placed within 12" of the center...however, there is a 12" "window" that runs from one table edge to the other in which NO terrain may be placed. 6" to either side of the 12" middle in the picture above would still be within the deployment zone, but terrain COULD be placed there. Note that even "scatter" terrain may not be in the center 12".


Warriors of Chaos Pre-Game Turn 1
The first unit on the card is the Chaos Marauders. They must enter from their edge anywhere within the deployment zone. They may move normally and, in this case, elect to march the full 8". 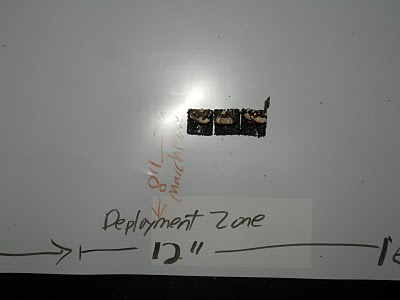 Dwarf Pre-Game Turn 1
The Dwarf Rangers, due to their Scout rule, must be the first Dwarf unit. They march the full 6". 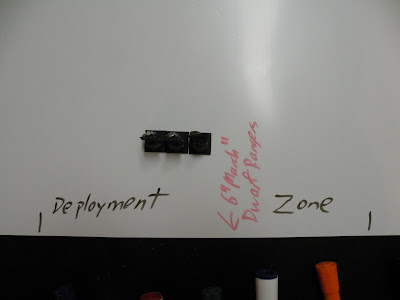 Here is a look at the completed pre-game turn 1. 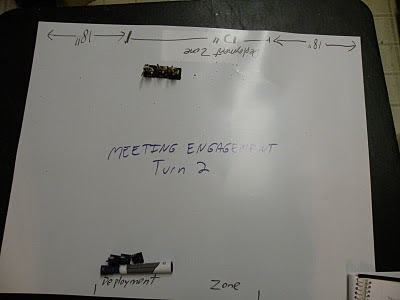 Dwarf Pre-Game Turn 2
The Dwarfs bring on their cannon. Note that War machines cannot march, so they only advance 3", the movement of their crew.
The Rangers March again, advancing 6" for a total of 12" onto the field. 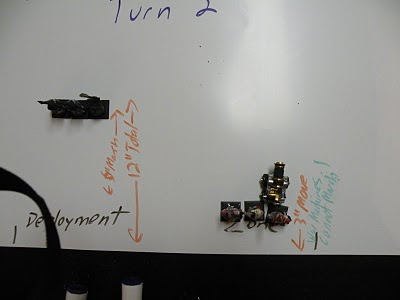 A look at the field after 2 pre-game turns apiece. 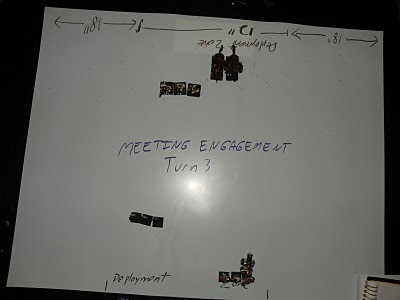 Warriors of Chaos Pre-Game Turn 3
General March forward.
The Dragon Ogre Shaggoth was 3rd on the list, so he moves on from the table edge. 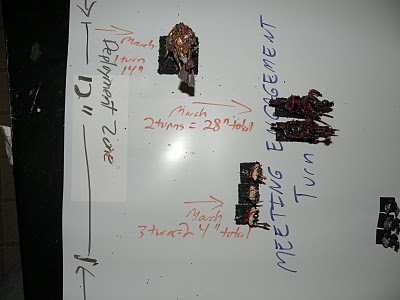 Dwarf Pre-Game Turn 3
The Rangers March 18", the Gyrocopter flies on from the table edge at an angle; note this is legal, they simply must enter the field through the deployment zone, but then may angle as this one did.
Since the cannon did not move, it now may fire as usual. The Gyrocopter may as well since that is within the rules, so even though it is its first turn on the field, since the Gyrocopter may move and fire, it may take advantage of any opportunity to do so. 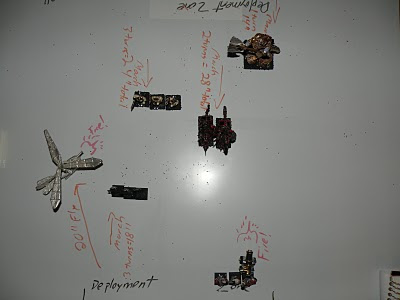 Warriors of Chaos Pre-Game Turn 4
The Knights are within range of the Dwarf Rangers, so may declare a charge.
However, the Marauders are within 8" of the Gyrocopter, so may not march this turn; they may only move 4", reform, or other normal maneuvers.
The Shaggoth is outside 8" of any Dwarf, so may still march, as may the characters who come on all together. 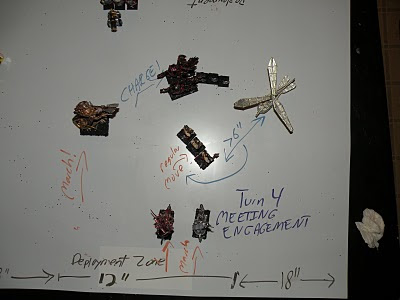 Dwarf Pre-Game Turn 4
As we have already seen, the units already on the table may act as normal and the Characters come on all at once. 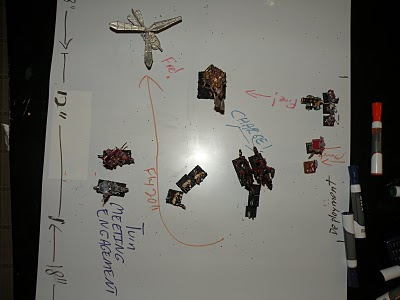 Pre-Game Ends
Only now do we need a turn counter, as up until now we have been in the "meeting" portion. 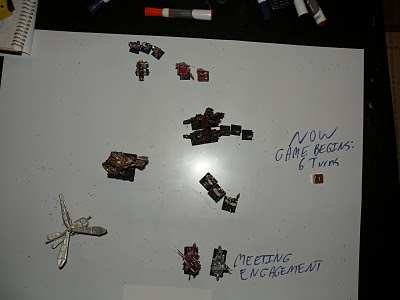 An up close look at the turn marker. 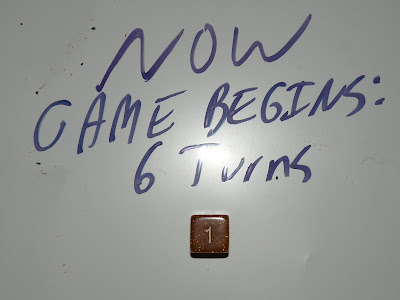 Note; If one army had additional units, say...the Dwarf army had a unit of Warriors, the Warriors of Chaos would simply take a turn with what they had, then the Dwarf Warriors would come on and THEN the game would begin. The 6 turns only start after all units from both sides have entered the field.
Additionally, units that enter on later turns...the Ogre Kingdom Gorger, the Warriors of Chaos Wulfrik the Wanderer, the Tomb King Scorpion for example...the owning player may do so at their option or may have them enter with the other units. Just mark which way you are doing it on the appropriate card.
Let the Meeting Engagement begin!