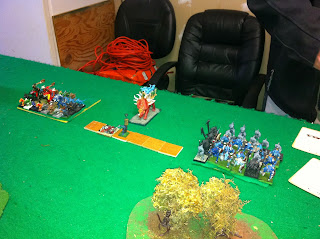 Anyway, tried to get together High Elf list but it came down to choice between Dragon Mage or Prince on Griffon...so I made the obvious choice of O&G.

I love starting with Gorbad. He is okay in close combat but where he really shines is letting me have an army of S4 multiple attack guys...and S5 on the first turn of combat.

I like putting the 10 boar riders with Gorbad. If they pass animosity they get in combat lightning quick. If they fail animosity they get into combat ever faster with potentially 25 S5 or 6 attacks without taking into account the 6 more Boar attacks. I like my odds of dealing out some damage.

Meanwhile the 20 strong Savage Orcs are a nasty unit in their own right. The Night goblins with short bows were a nuisance unit meant to whittle down the enemy and throw a few fanatics at them while the Mangler would control a flank with his potential for massive damage.

Meanwhile Deathnarok is a fast, potentially very hard hitting unit that will get where I need it when I need it.

The result is a compact, mobile, tough, hard hitting army (sounds a lot like my Warriors of Chaos, except less well armored. Ironically I have a much better save percentage with these guys...) 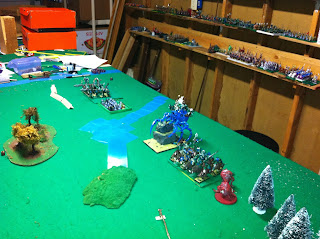 Unless I put the Mangler on the left with a clear shot, the Boar Riders next to him to crest the hill, the Deathnarok where he could cross the river in one turn. The Night Goblin bowmen held the center of the field and the foot Savage Orcs protected the right flank from his Cold One riders.

He centered his army around several swarms with a large block of Skinks/Kroxigor on my left flank, a bastilidon behind the swarms, a big block of saurus behind the forest and his cold ones on my right flank.

O&G Turn 1
I did a general advance. My 20 strong bowmen could not fire, the Deathnarok riders hit just once and he saved it. I got poison on my foot Savage orcs.

Lizardmen Turn 1
His Cold ones don't move. In fact, let me save time: they never move until I charge them in turn 4. Everything else makes a measured advance. He moves his Saurus into the forest and I realize what a huge mistake I made. He forces the Fanatics into the open. 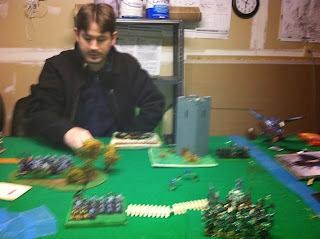 I can't send them after the Saurus...the forest would kill them. I have to launch them towards his Cold Ones on the right...which effectively takes my Savage Orcs out of the battle unless I want to change taking a massive hit.

Anyway, I have to let the Amber Spear hit Deathnarok, but it fails to wound. His shooting is better, wounding the Mangler twice. Ouch.

O&G Turn 2
I declare a double charge on the Skinks/Krox with my Boar Riders and Deathnarok.I am hoping the Mangler hits them and bounces out of my way first. Meanwhile I get my Night Goblins close enough to shoot at the Cold Ones. 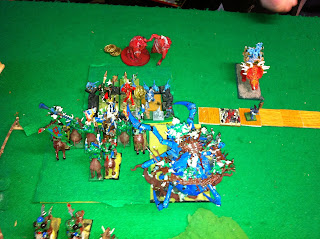 Time to save time: I get off 56 shots with them in this game. I get 1 wound, which he saves. For the remainder of the game this unit fires ineffectually while the shaman goes nuts.

My charge hits home with both units but he stand and shoots down 3 of my Savage Orcs. Ouch. 30% gone already?

I get Bad Moon off and ship the vortex through his Saurus and Swarms. I forget it is a template and have him take just 6 tests. He loses 1 Saurus. Oops, my bad.

Meanwhile, Gorbad is in a challenge with a skink unit champ. I am licking my chops at the overkill. Except I only wound him 1 time. Oops. Warpaint is amazing, though, and I save both wounds his skinks put on me. Deathnarok kills 4 skinks, the Night Goblins on top do 5 wounds (hmm...), my Savage Orcs wound the Krox 5 times,kill off 3 more skinks...he flees, I run him down...and run into the Mangler. Between what he did to me and what I do to myself with the Mangler, I am down to Gorbad and the command models. I have lost 6 of that unit already...this is not good because my 20 man block is locked away on the right wing and the Deathnarok clipped the Swarms in his overrun.

Lizardman 2
His Saurus move to flank the Deathnarok next turn. He dispels Bad Moon, uses the shooting thing from the Bastilidon to put a wound or two on Deathnarok, I can only wound his hero once, the Night Goblins only do 1 wound, his SWARMS do 2 to Deathnarok...only a Thunderstomp lets me win. Well, that and the charge. But his anti-squishy ability saves the crumble. And he then adds a Swarm with the special rule...so they are STRONGER than they were before I attacked. This is not good... 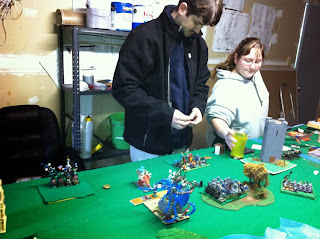 O&G Turn 3
I spin the Boar riders to face the bastilidon, one Fanatic caroms into the forest, I fail to restrain and my Savage Orc block fails their charge, moving just 4 or 5". I finish off his hero, do lots of wounds, but so does he...Deathnarok takes 4 more wounds. I am down to just 2 wounds.

Lizardmen Turn 3
His Saurus flank charge the Deathnarok. The Bastilidon does another shooting wound. He adds another Swarm.

Deathnarok will not go quietly, doing 4 wounds to the swarms and the Night Goblins do another, but his Saurus do 7 wounds to Arachnarok...who only had 1 left. Down goes Deathnarok as usual. 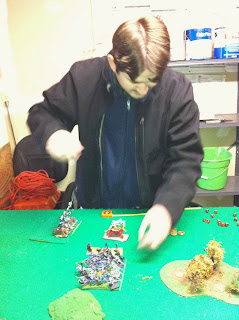 O&G Turn 4
The Savage Orcs fail to meet their charge distance. The Boar Boys charge the Bastilidon. Bad Moon succeeds, I do two wounds to the Swarms and kill a couple Saurus.

Gorbad hits the Bastilidon twice, both wound...and both multiply to 3 wounds, 1-shotting the poor Bastilidon. I clip the swarms on the overrun. 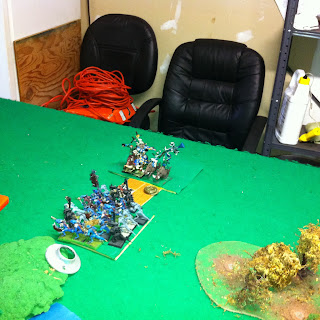 Lizardmen Turn 4
He flips the Saurus to face the nigh inevitable Savage Orc Boar Boy charge.
Gorbad, who remember does multiple wounds, has 4 attacks needing 3 to hit, 2 to wound, does...2 wounds to the swarms.But the Savage Orcs make up for it, doing 6 and the Boars do a couple more. Finally those obnoxious, lethal swarms (who ever thought I would say THAT?) are gone, gone, gone. Yeah! They go to crumble, so no overrun.

O&G Turn 5
I quickly check. He has 2 banners left. I just need to get one more. Unfortunately, I don't think the 3 remaining Savage Orc boar boys and the underwhelming Gorbad can take on 25ish Saurus. If he beats me in that combat I lose because I will only have 1 Fortitude. Oh, well, we are Orcs. The 20 man block charges the Cold One Knights, I charge his Saurus block. Death or Glory, right?

I get the Poison on the 20 man Savage Orc block with irresistible, do a wound to myself and lose rest of my power dice.

First I do the Savage Orcs on foot v Cold Ones. Our unit champs fight a challenge. I whiff all 4 attacks. His champ misses 2 of the 3 and cannot wound with the 4th. His Cold one hits once, cannot wound. That was...unimpressive.

Back to the important battle: if he wins it he wins the game, if we draw or I win it, his army will "break".

My Champ and his champ get in a challenge. Gorbad continues to prove outside of the Bastilidon, he just doesn't have a lot of combat power, doing just 1 wound. My unit champ does better, doing 2 wounds and saving the only wound done to him. (Go go gadget Warpaint!) 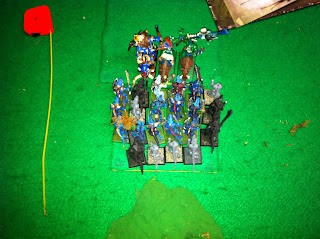 What Went Right
The combo charge was a thing of beauty. He never had a chance. I had so many attacks that even a sub-par outcome was still a devastating win. Gorbad one-shotting the Bastilidon was awesome and, words you have never heard before and will probably never hear again, I DOMINATED the magic phase, getting off Gift of the Spider I think 3 times and Bad Moon twice.

What Went Wrong
Bad setup of the Night goblins meant my Fanatics held up a powerful unit and did NOTHING to him.
My bowfire was...ineffective.
Dominating the magic phase killed 5 Saurus and 1 Swarm wound...not really a big deal.
Mangler did 3 hits to him...and 3 to me. That hurt me worse.


Overall it was a really fun game. Would have preferred a slightly different outcome, like...NOT tabling him, but I really like the new Lizard book and had a great time.

Posted by Darth Weasel at 7:25 PM 2 comments: Links to this post

For no apparent reason.. 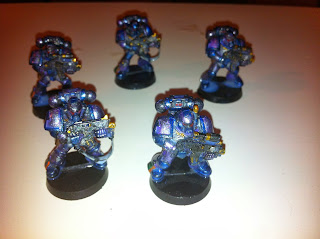 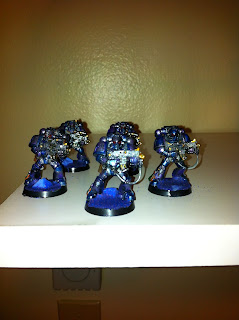 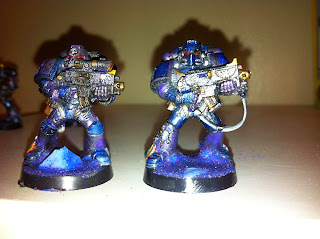 I am not much of a painter but I really like this color scheme.

The purple is Pearlized Amethyst by Plain, the Blue is Pearlized Blue Sapphure, same company. The green and orange were because I could not figure out what to do with those ribbons, they needed to stand out.

On the back I tried to make it look like glowing blue power with a white in the center, blended light blue, darker blue thing...not sure how it will look.

For the base I mixed blue and purple sand roughly half and half, then chipped up a blue "filler marble" and through it on the base to add texture.

I later did my first TRUE blend on the plasma gun. Yellow blending into orange into red to represent heat. I like how it turned out. If I get interest will post pics of that, otherwise just throwing these up for no reason other than to have a record of what I was thinking.

I would be interested to know if people concur with my assessment the gold highlights make the models 'pop"
Posted by Darth Weasel at 9:07 PM No comments: Links to this post